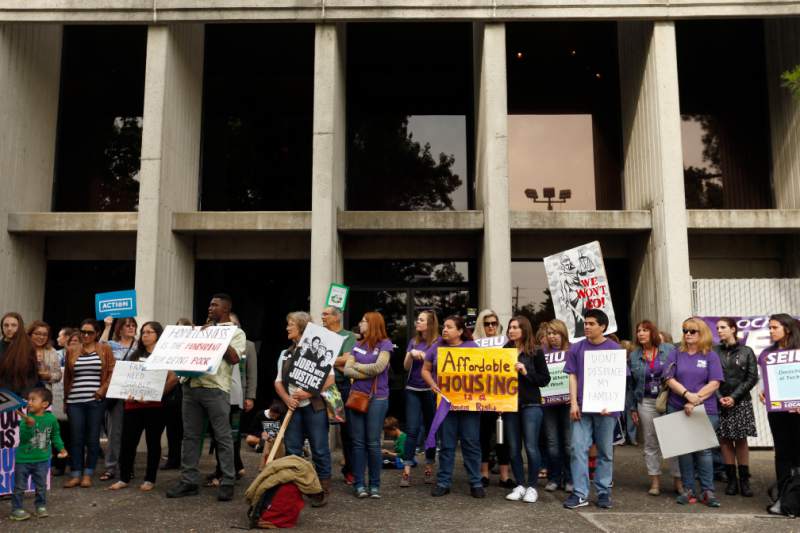 Santa Rosa enacted the strongest protections for renters in Sonoma County Tuesday, imposing a long-term rent control program and requiring that landlords have a good reason to evict tenants.

Long divided on the polarizing issue, the City Council voted 4-2 in favor of the program, which builds on a temporary moratorium on rent increases in place since June.

Mayor John Sawyer, who previously voiced strong opposition to rent control, abstained from the vote because he is a landlord. A decision on whether he has a conflict of interest is pending.

“This is a difficult and historic moment for our city,” said Combs, who stressed that the move was just one of several initiatives the council is taking to address the housing crisis.

But Olivares said he was uncomfortable with how the council majority seemed to be making policy on the fly, without research or analysis. He also pointed out that the new law will only affect a specific subset of renters.

“This truly is not protection for all,” Olivares said. “I think it’s some arbitrary protections for some, but I think in the end it will do very little to address our need for affordable housing.”

Given formal approval later this month, the ordinance will go into effect 30 days later.

From that point forward, landlords for about 11,000 apartments built before February 1995 will be allowed to increase rent by a maximum of 3 percent per year unless they can show they made major capital improvements to the property. Single-family homes, duplexes, owner-occupied triplexes and apartments built after February 1995 are exempt by state law.

Such capital improvements were generally defined as upgrades that extend the life of the building, the cost of which is at least eight times the monthly rent multiplied by the number of units. For a 100-unit complex with rents of $1,500, a capital project would have to cost $1.2 million to qualify for the exemption.

In that scenario, the landlord could theoretically increase rents $50 per month over 20 years.

If a landlord performs work that forces people to relocate, renters would also qualify for relocation benefits equal to three months of rent plus $1,500 for moving expenses.

Only a handful of landlords and rental industry advocates argued against the policy Tuesday, though in past meetings scores have offered vociferous opposition.

One of the sharpest critics Tuesday was Diane Darriman, who excoriated the council and said she wanted them all thrown out of office.

“I’m really angry at all of you,” Darriman. “My crime is I’m a landlord. Where is my representation here?”

She said she’s never raised her rents, still gets mired in the court system dealing with the “tenant from hell” and is now being told she can’t raise rents.

“You’re doing as much as you can to create havoc for landlords,” she said. “Thank you for nothing!”

Mallori Spilker, executive director of the North Coast office of the California Apartment Association, stressed that the move would not reduce housing costs and will not encourage any more housing to be built. She said the rules were “punitive in nature” and contained a “legally questionable” provision that rolls back rents to January 2016 levels.

Most speakers Tuesday, however, lauded the council for its move.

“This is a seminal moment in the history of tenant protections for Santa Rosa,” said Ronit Rubinoff, executive director of Legal Aid of Sonoma County. “We in the tenant community couldn’t be more thrilled to see the council unite and take such a powerful action to protect and stabilize our most vulnerable residents.”

The four supporting council members spent most of the evening resolving a long list of questions raised by the complex, 24-page-long draft ordinance. They seemed keenly aware of just how messy the process appeared.

“This is the sausage part,” Combs said.

At another point, they even debated what interest rate property owners should receive on the cost of their capital improvement plans. Wysocky suggested that for simplicity’s sake something other than the consumer price index should be used.

City staff would administer the program, with the help of three additional hires, said Dave Gouin, the director of housing and community services.

The program would cost about $1.1 to $1.4 million per year and would be funded by per-unit fees on landlords, half of which can be passed on to renters. Fees are expected to run between $102 and $125 per year.

If rental vacancy exceeds 5 percent citywide, the council agreed to revisit the program.

Read more:
http://www.pressdemocrat.com/news/5979650-181/divided-santa-rosa-city-council...
Issue:
Rent control
FAIR USE NOTICE. Tenants Together is not the author of this article and the posting of this document does not imply any endorsement of the content by Tenants Together. This document may contain copyrighted material the use of which may not have been specifically authorized by the copyright owner. Tenants Together is making this article available on our website in an effort to advance the understanding of tenant rights issues in California. We believe that this constitutes a 'fair use' of any such copyrighted material as provided for in section 107 of the U.S. Copyright Law. If you wish to use this copyrighted material for purposes of your own that go beyond 'fair use,' you must obtain permission from the copyright owner.