The Alameda Renters Coalition (ARC) will file the “Alameda Renter Protection and Community Stabilization Charter Amendment” initiative at Alameda City Hall Monday for inclusion on the November ballot in response to a crisis of mass evictions and average rent increases of more than fifty percent over a span of only four years.

ARC spokesperson Catherine Pauling says, "We are filing this initiative so the people of Alameda can do what its City Council has been unable to do: enact a firm set of laws to stabilize our community and protect renters from greedy investors."

"ARC recognizes the City Council's efforts but their ordinance has too many concessions to real estate interests and will not keep Alameda renters in their homes" says Pauling.

Specifically, the coalition objects to there being no cap on rent increases, merely a review process triggered by a rent increase of more than 5 percent. Additionally, the City ordinance subjects renters, once again, to the threat of no cause evictions when the current moratorium expires. ARC further objects to what it calls a "poison pill" in the ordinance allowing landlords to escape all eviction controls by simply issuing a "Fixed Term Lease".

"This filing begins the process of allowing voters of Alameda, over half of whom are renters, the opportunity to choose clear protections that renters and owners deserve instead of the cumbersome and un-tested process outlined in the City ordinance," says Pauling.

The Alameda Renters Coalition, formed in 2014, advocates for clear, rational rent stabilization tied to the Consumer Price Index, as is used by many other cities in the Bay Area in determining rental rate increases.

Prior to the 4 p.m. filing in the City Clerk's office, representatives of the Alameda Renters Coalition will be available on the steps of Alameda City Hall at 2263 Santa Clara Avenue to answer questions of the media and provide copies of the initiative. 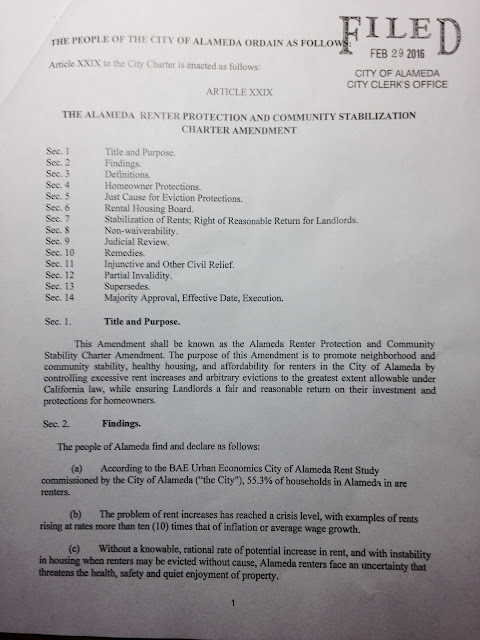 About ARC
Alameda Renters Coalition is a group of Alameda city residents who recognize housing as a basic need, and seeks to bring housing stability to their community and a member organization of Tenants Together. Tenants Together has been providing technical assistance and advice on best practices on policy. For more information visit www.thealamedarenterscoalition.org .