Examining Wedgewood: A Look at the Home-Flipping Giant in Battle With Homeless Mothers 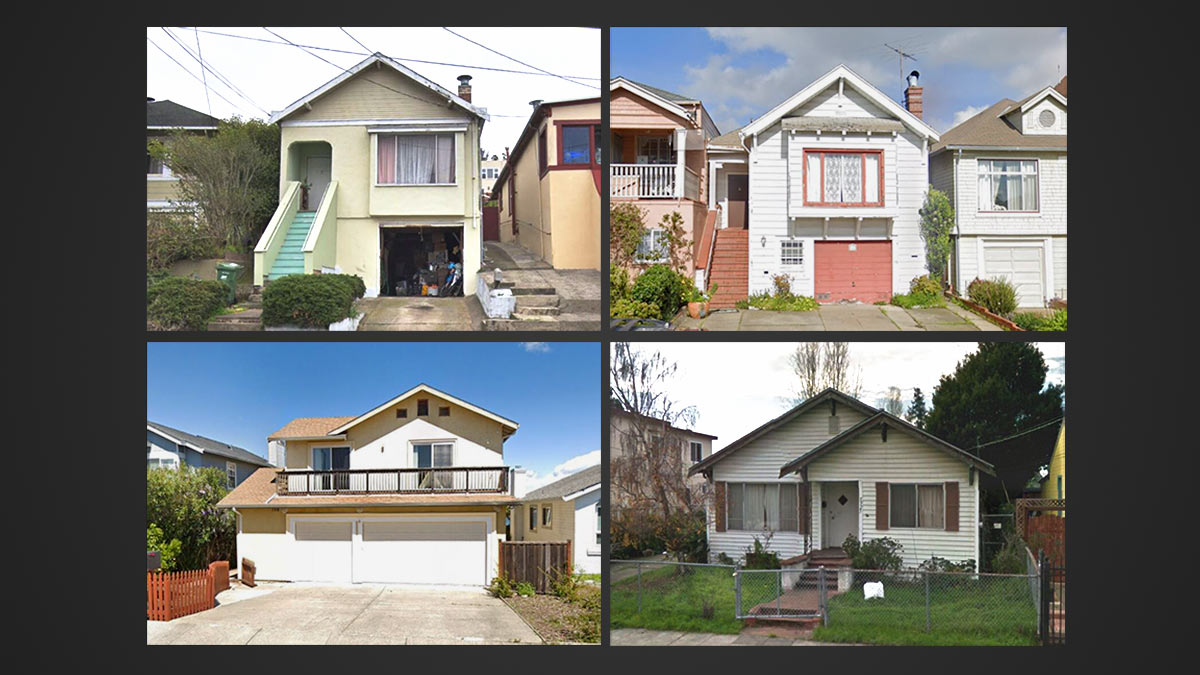 Southern California home-flipping giant Wedgewood Inc. was thrust into the spotlight last month when homeless mothers from Moms4Housing began squatting in a vacant West Oakland home owned by the company and refused to leave. It’s an unusual situation for Wedgewood, which until recently, had received little public attention or scrutiny in Northern California. Attorneys representing Moms4Housing argued in Alameda County Superior Court on Monday that housing is a human right and the mothers should be allowed to stay because of the ongoing homelessness crisis in Oakland. Judge Patrick McKinney is expected to release a ruling in the coming days. While all eyes are focused on the battle for control of the three-bedroom home on Magnolia Street, scant attention has been paid to Wedgewood’s other activity in the region, which has faced legal challenges from tenants and opposition from housing advocates. An NBC Bay Area analysis of property records and legal filings revealed Wedgewood’s Bay Area real-estate portfolio is far more extensive than the Magnolia Street home they purchased out of foreclosure in August. The home represents less than one percent of Wedgewood’s Bay Area holdings, and a much smaller fraction of what the company owns nationally. Determining the extent of Wedgewood’s property ownership in the Bay Area and elsewhere is difficult because the company conducts business through a sprawling network of LLCs, such as Catamount Properties 2018, LLC, which owns the home currently occupied by the homeless mothers.  But Catamount Properties 2018 is just one of 98 active LLCs NBC Bay Area traced back to Wedgewood using secretary of state business filings and a database of property records from Santa Clara County and San Mateo County. While the LLCs have different names, they share one common characteristic connecting them to Wedgewood: The mailing address of the company’s Redondo Beach headquarters. Wedgewood currently owns at least 125 properties across eight Bay Area counties through its network of LLCs, according to a review of assessor and recorder records. That tally doesn’t include any properties the company might own in Solano County, which said it could not provide ownership records over the phone. It’s also possible there are additional LLCs tied to the company not identified in NBC Bay Area’s search. Of those 98 active LLCs, 31 Wedgewood entities appear to have owned property in Bay Area counties since 2015, according to assessor and recorder records. The other entities appear to perform separate functions for the vertically integrated company. But the current count of Wedgewood’s properties doesn’t accurately portray the scope of the company’s Bay Area operation. Its business model, centered around buying, fixing, and quickly flipping homes, means Wedgewood rarely holds onto homes for long. Although the Magnolia Street home was vacant when the homeless mothers took it over in November, Wedgewood had just purchased the home in August and said it planned to fix and sell the home soon. Deed records from counties across California reveal thousands of property transactions over the past five years. Although these records confirm activity in a given area, there may be multiple transactions for a single purchase or sale. The Wedgewood LLCs identified by NBC Bay Area show up more than 220 separate times since 2015 in Solano County deed records, 726 times in Kern County deed records, and 926 times in San Bernardino County deed records. And that’s just California. In Dallas County, Texas, for example, there were more than 544 deed records tied to Wedgewood LLCs since 2016, and more than twice that in Broward County, Florida. Catamount Properties 2018, LLC is currently registered in 18 different states, according to state business records. !function(){"use strict";window.addEventListener("message",function(a){if(void 0!==a.data["datawrapper-height"])for(var e in a.data["datawrapper-height"]){var t=document.getElementById("datawrapper-chart-"+e)||document.querySelector("iframe[src*='"+e+"']");t&&(t.style.height=a.data["datawrapper-height"][e]+"px")}})}(); “That kind of speculative activity drives up the cost of housing,” said Amy Inglis, a program director at Tenants Together, a San Francisco-based non-profit tenant advocacy group. Although corporate acquisition of foreclosed properties has slowed significantly since the peak of the foreclosure crisis, Inglis said the practice continues, and it can lead to the displacement of tenants renting homes that went into foreclosure. “Corporations were buying up homes in foreclosure and many of those homes were already rented,” Inglis said. “By the end of the crisis, we saw from our count at least a million tenants in California were displaced by that activity of new owners coming in and giving tenants an eviction notice instead of allowing them to stay, and then flipping the properties.” In response to NBC Bay Area’s request for comment, a representative for Wedgewood said:


The Company acquires a large number of distressed properties on a regular basis, the vast majority of which are occupied by the prior owners, whom their lender foreclosed upon. In some instances, the properties are non-owner occupied and, in those instances, to the extent the occupant is legally entitled to remain in the property, Wedgewood honors that right and allows them to stay for the duration of their lease or other entitlement.  Wedgewood always follows all legal requirements in connection with its efforts to obtain possession of the properties it purchases.Sam Singer, spokesman for Wedgewood

A search of court filings in four counties where Wedgewood has owned property revealed more than 300 lawsuits since 2015 that involve the company, mostly unlawful detainers in which the company was attempting to evict a tenant or former owners living in a home it recently purchased. In San Bernardino County alone, Wedgewood has been a party in 275 lawsuits since 2015, the majority of which were unlawful detainers. “They basically get properties that people are living in and then their job is to evict them,” said Leah Simon-Weisberg, Legal Director for Alliance of Californians for Community Empowerment (ACCE). Simon-Weisberg is handling the eviction defense for the homeless mothers occupying the Magnolia Street home. The moms did not inhabit the home nor own the property when Wedgewood bought it in August. Thus the dispute differs from other lawsuits involving Wedgewood where legal action was taken against the prior owner or existing tenant of a property at the time it was purchased by the company. “It’s almost like they’re an eviction machine as much as anything else. That’s what they’re selling. They get the properties, kick people out, and sell them empty,” Simon-Weisberg said. In San Francisco, a city with strong tenant protection laws, Wedgewood was accused on three separate occasions since 2016 of wrongfully evicting tenants renting foreclosed properties the company had recently purchased. In a 2016 lawsuit, plaintiff Maria Hernandez sued Wedgwood for wrongfully evicting her from a home she’d rented for years. The lawsuit alleged an agent for Wedgewood used illegal tactics to get her out of the home once she refused a small buyout. “Defendant Wedgewood has directed its employees and its agents to aggressively clear out foreclosed homes, while concomitantly directing its employees and agents to refrain from repairing the substandard conditions within these properties until all occupants have been vacated and/or been forced to vacate,” the complaint stated. “Where such pressure tactics are unsuccessful, Defendant Wedgewood’s eviction department assigns these tenant-occupied properties to local eviction attorneys who uniformly commence “no cause” post-foreclosure eviction proceedings that illegally circumvent the just cause eviction protections.” At the time, Wedgewood denied each allegation in a written response to the court.  Two of the wrongful eviction lawsuits in San Francisco reviewed by NBC Bay Area were settled for undisclosed amounts. One remains active. In response to NBC Bay Area’s inquiry about the cases, a representative for the company said, “The two cases that were settled have confidentiality provisions that limit Wedgewood’s ability to respond beyond saying ‘the matter was resolved.’” Although the West Oakland house was vacant when the Moms4Housing mothers seized the property, they did so without permission from Wedgewood. Now the company is in a legal fight to evict them. Wedgewood has served an eviction notice to the Moms4Housing mothers and a favorable ruling for Wedgewood in Alameda County court could lead to removal of the moms. Meanwhile, Oakland City Councilmembers Rebecca Kaplan and Nikki Fortunato Bas have demanded that Wedgewood negotiate to sell or give the property to the women.

Read more:
https://www.nbcbayarea.com/investigations/examining-wedgewood-a-look-at-the-h...
FAIR USE NOTICE. Tenants Together is not the author of this article and the posting of this document does not imply any endorsement of the content by Tenants Together. This document may contain copyrighted material the use of which may not have been specifically authorized by the copyright owner. Tenants Together is making this article available on our website in an effort to advance the understanding of tenant rights issues in California. We believe that this constitutes a 'fair use' of any such copyrighted material as provided for in section 107 of the U.S. Copyright Law. If you wish to use this copyrighted material for purposes of your own that go beyond 'fair use,' you must obtain permission from the copyright owner.