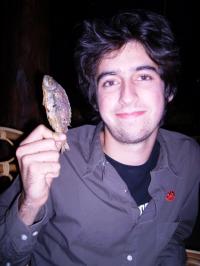 Three months later we were still looking for an apartment, despite having good credit, steady incomes, and solid references. We would show up at apartments with twenty other groups applying for the same unit. We would have a check in hand ready to sign for it but they still wouldn't give us the place.

While the landlords or property managers knew we were more than able to pay the rent, we still couldn't compete in the rental market. We'd be talking with a landlord and it would be going real well, and then a young couple would walk up, both with jobs in the financial district pulling in 60 grand a year. To the landlord the choice was clear: three or four young guys and gals with stable but relatively low incomes, or a nice couple driving a BMW.

Half the places we were looking at were barely habitable and not worth the money--not that we had a choice. The "bedrooms" in these places were often living rooms being called bedrooms. Other units were so small two could barely live in them, let alone the three or four we'd need to cram in to afford one.

Finally we lucked out--or at least it felt like we did--and found a building that was owned by a nice family, who only wanted assurance the rent would be in on time. The apartment we finally got is in great shape, but a very expensive three-bedroom. So we've crammed five of us in it to be able to afford it.

Despite finding out that we're paying far more than the other tenants in the building who have been there for awhile for almost identical units, it's been working out so far. And thanks to rent control we at least know we won't get priced out of it, at least as long as we don't mind living in close quarters. But we don't plan on going anywhere soon.

Thanks, Tenants Together for keeping up the good fight!