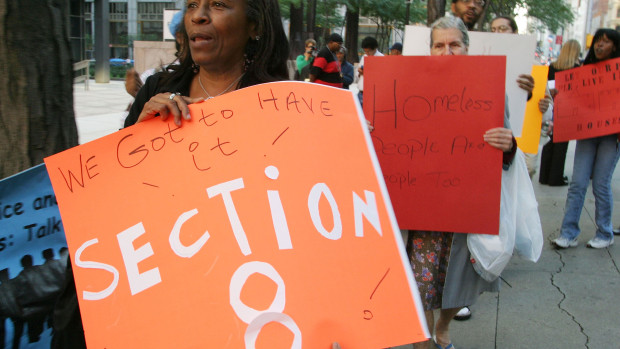 In a major victory for tenants, a court on Monday upheld a Santa Monica ordinance that bans discrimination against Section 8 voucher holders.

Tenants Together and two voucherholders, Sonjia Sheffield and Stephanie Keys, were represented by the Legal Aid Foundation of Los Angeles and Western Center on Law and Poverty in this case. Sonjia is a longtime Santa Monica resident who had tried to find a larger apartment within the city, but was told by approximately 50 landlords that they do not accept vouchers. Stephanie Keys, a mother of three, had searched for an apartment in Santa Monica unsuccessfully for about two years.

Section 8 discrimination is a huge problem in California. Tenants Together and our allies pushed for a bill banning such discrimination, but thanks to opposition from real estate interests, the California Legislature has refused to pass such a law, leaving cities to try to protect tenants. Landlord advocacy groups have argued that local protections are pre-empted by state law. This case squarely rejects the landlords' arguments.

This case could have far-reaching effects throughout the state, and may prompt other local governments to pass similar ordinances. Marin County and the cities of San Francisco, Corte Madera, East Palo Alto and Woodland have all passed ordinances prohibiting discrimination based on source of income. Landlords in San Francisco have sued to stop the ordinance as well.

Santa Monica had passed an anti-discrimination ordinance in May 2015 after the city received multiple complaints from prospective tenants that landlords were refusing to accept their housing vouchers. The Apartment Association of Greater Los Angeles (AAGLA) sued the city of Santa Monica, arguing that the California Fair Employment and Housing Act made the ordinance invalid.

The ruling this Monday by Los Angeles Superior Court Judge Lisa H. Cole dismisses the lawsuit and allows the city to proceed with the ordinance. This ordinance is especially important to protect low-income tenants in Santa Monica, given the high cost of housing and the difficulty many low-income tenants and voucher holders have in finding affordable apartments. There are 1,097 tenants in the City of Santa Monica who use Section 8 vouchers to pay for their apartments.

"Housing vouchers can mean the difference between homelessness and safe, stable housing,” said Senior Attorney Navneet Grewal of Western Center on Law and Poverty who represented Tenants Together in the case. “We hope that other cities with similar affordable housing shortages will consider passing ordinances like Santa Monica’s so that this valuable federal resource can be put to good use.”

Tenants Together congratulates the City of Santa Monica, intervenors Stephanie Keys and Sonjia Sheffield, and the attorneys at Legal Aid Foundation of Los Angeles and the Western Center on Law and Poverty on this important victory.