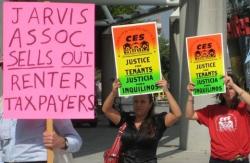 He's a disabled Vietnam veteran. She's a retired teacher who spends most of her pension on health insurance.

Arnie and Marilyn Bernstein are among an estimated 1million Angelenos with a rent-controlled apartment.

But if voters kill rent control in a June ballot measure, the Bernsteins say, their monthly payment would jump from $876 to $1,300 - a 48 percent increase.

"We couldn't afford another apartment," said Marilyn Bernstein, 62, of Canoga Park, who has lived in the one-bedroom unit for 21 years. "We'd be living under a bridge - like `Tent City, here we come.' The possibility of lifting rent control would be devastating."

Critics of Proposition 98 say it is billed as stopping government from seizing property for private use, but really aims to abolish tenant protections statewide because it also contains language to phase out rent control and gut laws that protect renters from unfair evictions.

Safeguards for mobile-home residents also would be imperiled, they say.

"Proposition 98 is a wolf in sheep's clothing that would roll back key environmental and tenant protections," Los Angeles City Council President Eric Garcetti said. He authored a city resolution against the measure last week.

He supports a rival ballot measure, Proposition 99, "which would protect Californians from government taking property that should remain in private hands, but wouldn't negatively impact other important environmental and tenant laws," he said.

Proposition 98 is a statewide ballot measure sponsored by the Howard Jarvis Taxpayers Association that would limit the ability of governments to seize private commercial property and homes and turn them over to private developers.

Proposition 99 is supported by the League of California Cities and would protect only homeowners from having their property seized for private use.

Big money has already streamed in to support both campaigns.

Of the $3.9 million for Proposition 98, critics say 80 percent has come from interests connected to owners of mobile-home parks and apartment buildings.

Most of the $7.1 million funneled in for Proposition 99 has come from a coalition of government associations, environmental groups, businesses and labor unions.

Supporters of Proposition 98 say it would prevent governments from taking homes and businesses through eminent domain and transferring it to a private owner, possibly to build a shopping mall or a business park.

The measure would also restrict government's ability to seize private property for water projects and would grant new compensation to owners when their property is taken.

They say it would also put a stop to government's power to set the price for which owners could sell or lease their properties.

Jon Coupal, president of the Jarvis association, has maintained that the measure was ultimately designed to give the strongest protections to property owners, including landlords.

But he also has said the initiative would continue to protect tenants living within the state's dozen rent-controlled cities.

"It doesn't make it easier to evict anybody," Coupal said. "All the protections under existing law remain in effect. Only when that unit is vacated can anybody raise rents.

"We actually take the existing protections against evictions and make them part of the California Constitution."

Naysayers insist, however, that the landlord-backed measure would essentially end rent control in California.

And once a tenant living under old rent-control laws moves out, rents can be hiked at any time for succeeding tenants.

That could have huge consequences for Los Angeles, where 61 percent of residents rent. Of the 1 million rent-controlled units in California, 627,000 are in Los Angeles, with 46,000 more of them in West Hollywood and Santa Monica, according to the Coalition for Economic Survival, a pro-tenants group.

"This city will be the hardest hit, as well as this entire region," said Larry Gross, executive director of the coalition and a Southern California leader of the campaign against Proposition 98 and for Proposition 99.

"Renters will wake up one day in June, if (98) passes, and they will wake up defenseless, and their landlords could put them out on the street," he said.

Opponents of the initiative include AARP, the League of Women Voters of California, the Western Center on Law & Poverty and former Gov. Pete Wilson.

AARP and the League of Women Voters held a news conference Wednesday in Pasadena to bring awareness to what they say are "deceptive and shameful" radio ads supporting Proposition 98.

Abida Sheikh, who owns a Northridge apartment building with six units, said she could charge tenants hundreds more a month without rent control. But she said insurance and property taxes, which suck up four months worth of rents, are harder to take.

"I'm with rent control," she said. "It's not hurting us. It's the property taxes and insurance that is killing us - and bad tenants. They don't want to pay the rent, and they say, `Come back tomorrow."'

Arnie Bernstein said his landlord has been trying to drive him and his wife out for years to jack up rents. Without rent control, they'd be forced to leave the state.

"All these landlords think they are getting shortchanged because they can't get market value," said Bernstein, 64, who lives on Social Security. "But many of them aren't worth market value.

"Where I live, you can hear people fornicating next door. The plumbing is bad. If I first came to L.A. and they offered me this place for $1,300, I would about-face and walk away."