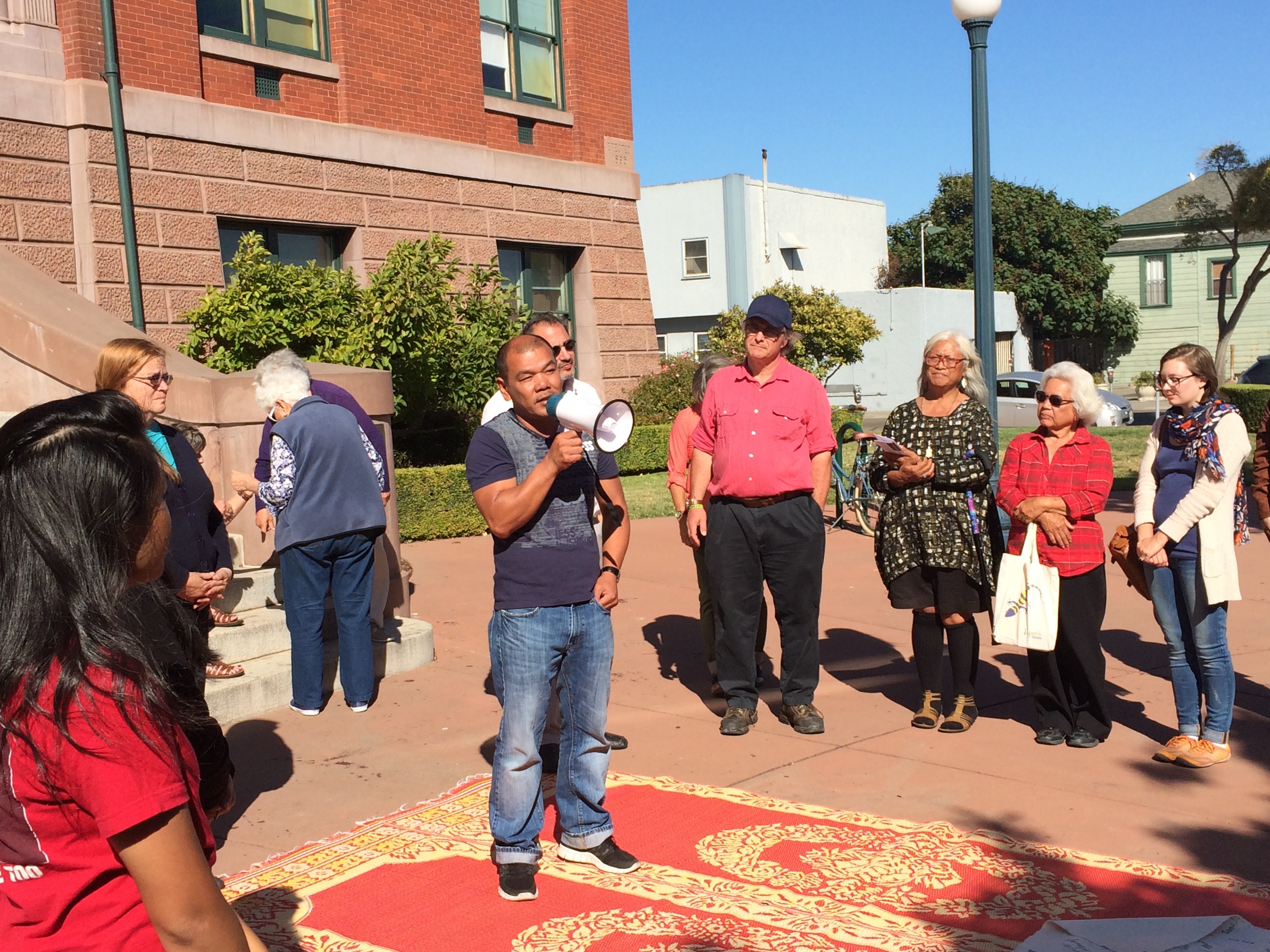 Members of several tenant advocacy groups congregated at the front steps of City Hall on Monday, Aug. 8, to voice their displeasure with the evictions and other harassment taking place at Bay View Apartments.

The rally was spearheaded by members of the Alameda Renters Coalition (ARC), the advocacy group that has placed an amendment on the November ballot, and Tenants Together, a statewide renter’s rights organization. The topic of discussion at the rally centered on Bay View Apartment landlord Matt Sridhar, CEO of San Jose-based Sridhar Equities, LLC, evicting several tenants from their living spaces through “no-fault” evictions.

“I’ve been fighting this eviction since last November,” said Rommel into a megaphone. “The stress that I have been putting up with; my heart breaks down.”

Rommel said he has been living at the apartment building at 470 Central Ave. for several years. He was given his first eviction notice last November, but Sridhar had to temporarily hold off on the deadline when City Council elected to place tenant evictions on hold late last year. However, when the council voted to pass its “Rent Stabilization and Limitation on Evictions Ordinance” in March, it put in a stipulation that landlords can evict 25 percent of tenants a year, according to ARC, through “no fault” evictions. Laguardia received his second eviction notice a couple of months later.

Laguardia’s case is even more troubling because he is stuck in an untimely bind.

The ARC amendment “Alameda Renter Protection and Community Stabilization Charter Amendment” won’t be voted on until Nov. 8, however, Laguardia’s eviction date is Sept. 19. So Laguardia might be forced to move out well before the measure is voted on.

“I think they are doing this on purpose,” said Laguardia. “They know that if the rule passes they won’t be able to evict people so they want to get people out before the vote.”

Laguardia got his eviction notice after the ARC amendment was approved to be placed on the November ballot. He has since talked to members of the Council, but said the Council has not helped him.

“I’ve talked to Jim Oddie and (Tony) Daysog,” said Laguardia. “They tell me to get legal advice. I feel like they’re not on our side.”

Tenants who have not got eviction notices are also displeased with the treatment from the apartment’s management staff.

Austin Durano is also a tenant at Bay View Apartment. He has not been given an eviction notice, but he feels the quality from the on-site management has deteriorated in the last few months.

“I have been having issues with the sliding door in my bathroom, there is a hole in my wall and sometimes the hot water goes out for hours at a time,” said Durano. “When I try to talk to the manager he shuts the door in my face.”

Durano said someone finally came to his place to look at his apartment needs but when he was not around. He said after he came back after the maintenance men left, money was taken from his room. He also said there was an instance when the building manager called police on him saying he smelt “drug smoke in the apartment.”

“The police came and found nothing,” said Durano. “I believe this is harassment from Sridhar. They want us to leave on our own so they are harassing us. They treat us like we’re low people.”

The Bay View Apartments is occupied mostly by Filipino families. Laguardia and Durano are of Filipino descent.

ARC member Catherine Pauling emceed the event. She also voiced her opposition at the event of the city placing its ordinance on the November ballot.

“This is a tactic that will dilute the vote for the renter’s ordinance,” said Pauling.

On July 19, 2016, the City Council voted unanimously to place the City measure on the November ballot, asking the voters to confirm the ordinance. The City Council wants to retain the authority to amend or repeal the ordinance without a vote and make sure the ordinance passes as long as it receives the highest number of votes regardless of the outcome of the other initiatives.

In all, about a dozen speakers went in front of the crowd of about 50 people at the event. Some spoke about how rising rent crisis has affected them personally and their community.

Sridhar Equities is a Real Estate agency that owns properties throughout the Bay Area and other metro areas. Calls to Sridhar were not returned by press time.

Read more:
http://alamedasun.com/news/renters-group-rally-stop-mass-evictions
Issue:
Retaliation/harassment
Eviction
FAIR USE NOTICE. Tenants Together is not the author of this article and the posting of this document does not imply any endorsement of the content by Tenants Together. This document may contain copyrighted material the use of which may not have been specifically authorized by the copyright owner. Tenants Together is making this article available on our website in an effort to advance the understanding of tenant rights issues in California. We believe that this constitutes a 'fair use' of any such copyrighted material as provided for in section 107 of the U.S. Copyright Law. If you wish to use this copyrighted material for purposes of your own that go beyond 'fair use,' you must obtain permission from the copyright owner.