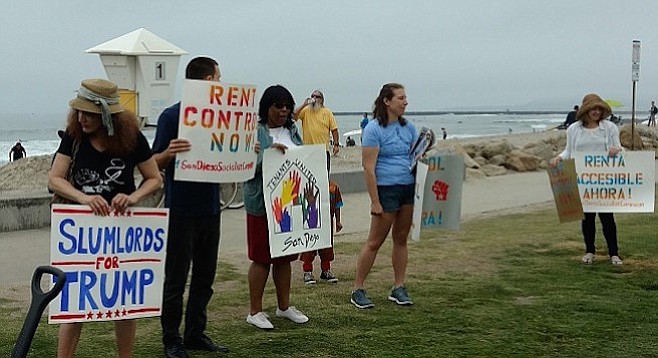 A group of activists seeking a rent-control ordinance and other tenant-protection measures gathered in Ocean Beach on Saturday (June 4), circulating a petition they hope will convince the city council to open a dialogue concerning their grievances.

"We're trying to raise awareness of the need for housing justice in San Diego, and that comes through a triangular platform involving either rent control or rent stabilization, better code enforcement, and wise investment in communities that doesn't displace residents who've been there for years," explained Rebecca Schulman of San Diego Tenants United, a collection of individuals organized via social media that has also participated in organizing protests against alleged substandard living conditions at a Linda Vista apartment complex.

"The people we're targeting are really unscrupulous," Schulman continued. "The private, owner-occupied buildings, those people usually have a conscience and care about the conditions their tenants are living in. The people we're targeting own large numbers of units…maybe they don't even live in the state, they have no idea what kind of condition their property is being kept in."

Schulman said she had spoken to landlords both locally and in other California cities where rent-control laws are in place, and most are supportive of a structure that places an annual cap on rent increases for existing tenants and has strong language requiring maintenance of buildings. Other property owners, however, have drawn the attention of activists for alleged wrongdoing.

"Michael Mills has…been paying cash for multi-unit buildings around O.B. and, after 60 days, raising rents," charged Schulman. "Some of the tenants who've remained in these buildings say they're half empty now, and though he's coming in and putting a little paint on, some flooring, but if you look at the properties he owns they're really some of the gnarliest, most run-down buildings in O.B.”

A Facebook page set up specifically for Mills’s tenants has garnered 49 likes but has seen little activity. A public records search based off one address indicated five buildings in the Ocean Beach area are owned by the same trust, though none appear to have been purchased within the past two years. Such a search, however, may not be indicative of a group's total holdings, as separate trusts, limited liability corporations, or other structures may have been set up to hold title to more recent acquisitions.

Meanwhile, Schulman says her group's activities are continuing to gather momentum as others around the county catch word.

"I'm getting messages from people all over — Escondido, Santee — who want to start rent-control petitions. So, people are really starting to come out of the woodwork and realize there are more of us working on the same thing."

Read more:
http://www.sandiegoreader.com/news/2016/jun/06/ticker-rent-control-protest-ob/#
Issue:
Rent increases
Rent control
FAIR USE NOTICE. Tenants Together is not the author of this article and the posting of this document does not imply any endorsement of the content by Tenants Together. This document may contain copyrighted material the use of which may not have been specifically authorized by the copyright owner. Tenants Together is making this article available on our website in an effort to advance the understanding of tenant rights issues in California. We believe that this constitutes a 'fair use' of any such copyrighted material as provided for in section 107 of the U.S. Copyright Law. If you wish to use this copyrighted material for purposes of your own that go beyond 'fair use,' you must obtain permission from the copyright owner.