Hello! My name is Kelly and I was this summer's Community Organizing Intern at Tenants Together. I came to California from the other side of the country, New York to be precise, and this summer I found myself with the honor of working at Tenants Together. Growing up, my upbringing took place in rural suburbia, surrounded by farms. It was not until my family took a train from Penn Station that I encountered a real city. I was fascinated by New York, there were so many people and things to look at, and I was happily overwhelmed. That is, until a man walked up to my mother and asked her to buy him some chicken. I don’t remember much else about the trip, whether she bought the chicken, what the train was like.

By the end of the day, I was still thinking about this interaction. I couldn’t believe that people struggled with things like having enough food to eat. From then on, I have continued to be shocked by the struggles that some people go through. I thought, well then, I’ll try to change it (I was rather optimistic). What better way to make a change than organizing. I didn’t know that such a thing existed when I started college, but I had decided that I wanted to be a community organizer.

So how does a girl from rural upstate New York end up in the California Bay Area working with housing rights?

It was a series of lucky coincidences. I have family who live in the Bay Area, and I did not think that my home town, which by all rights is nothing more than a post office, held the same opportunities that a fully formed city would in terms of my organizing goals. So, I began applying to every non-profit that I could find in the Bay area. I had a number of options on my plate, but Tenants Together jumped out at me from the beginning of my search because I worked with housing rights groups in the Bronx, where I go to college, for several years now.

Tenants Together put me to work right away.

On my first day I was making phone calls, asking people to call their local representatives, and learning the ins and outs of NationBuilder (a platform used by Tenants Together to store and organize data). This turned out to be better than an extensive orientation, than spending lots of time training at the front end. Training as I worked, learning as I went along worked better for me, and more applicable to what I was doing. What I was learning were often life lessons, anything from Spanish pronunciation to driving with a slightly distracted director. More than anything else, easily the most important of my lessons were those I learned while out door knocking.

This summer has been full of wonderful experiences, memories I will cherish and continue to learn from as I grow, but my favorite of these was the day of “the big meeting”. I have taken to calling it this in my head, but in reality, it was simply Tenants Together July monthly meeting in Concord (East Contra Costa County). It happens every month, but for the month of July, I was tasked with outreach, calling and talking to people to increase turnout at the meeting. The goal was to double the turnout from the previous month’s meeting, which was 7 people. My boss Guillermo and I had been talking, calling, and door knocking, targeting certain areas for issues they had been experiencing.

The day of the big meeting

On this particular day, July 22nd to be specific, we had gone out to Concord to remind people about the meeting and ask if they needed rides to get to the meeting. I was unofficially in charge of talking to the Algerian population, as with their small amount of English and my small amount of French, we could cobble together a language in which we could communicate relatively easily. Guillermo was talking to the Spanish speakers in the building, so I went to talk to Samia. She had just had a child, now about 5 days old. We had been talking for weeks, and now the baby had finally arrived. She invited me in, introduced me to the baby, and plied me with questions and cookies for the better part of 20 minutes. Another Algerian woman too would not take no for an answer when she invited me in to share cake with her and her husband. It seemed that everyone I spoke to that day invited me into their homes with smiles and friendship.

I realized I was building relationships with these people. We had jokes, asked about changes in each other’s lives, suggested solutions from our own experiences. I was of course a representative of Tenants Together, useful for housing rights questions, but I was also becoming a friend. From everything I have learned, and more importantly everything I have seen in my studies, it is the relationships between people that provide a support system. This is so important in creating power, and building up power in numbers is the real way that people can affect change. Following this logic then, relationships are power. I am no where near in a position to call myself an organizer, however that was the first time when I started to believe that I could be one. Now, so as not to leave you curious, I should mention that compared to the 7 people who had attended the previous month’s meeting, this meeting boasted a population of around 35 people, not counting the gaggle of very excited children running about in the hallway outside.

That day, July 22nd was a learning experience in so many ways. Things like successfully navigating a part of town I had never been in before to discovering how much having food and rides can affect turnout at a meeting were noted. Even how the distribution of pens can affect the atmosphere in a room. My whole summer has been full of such moments. 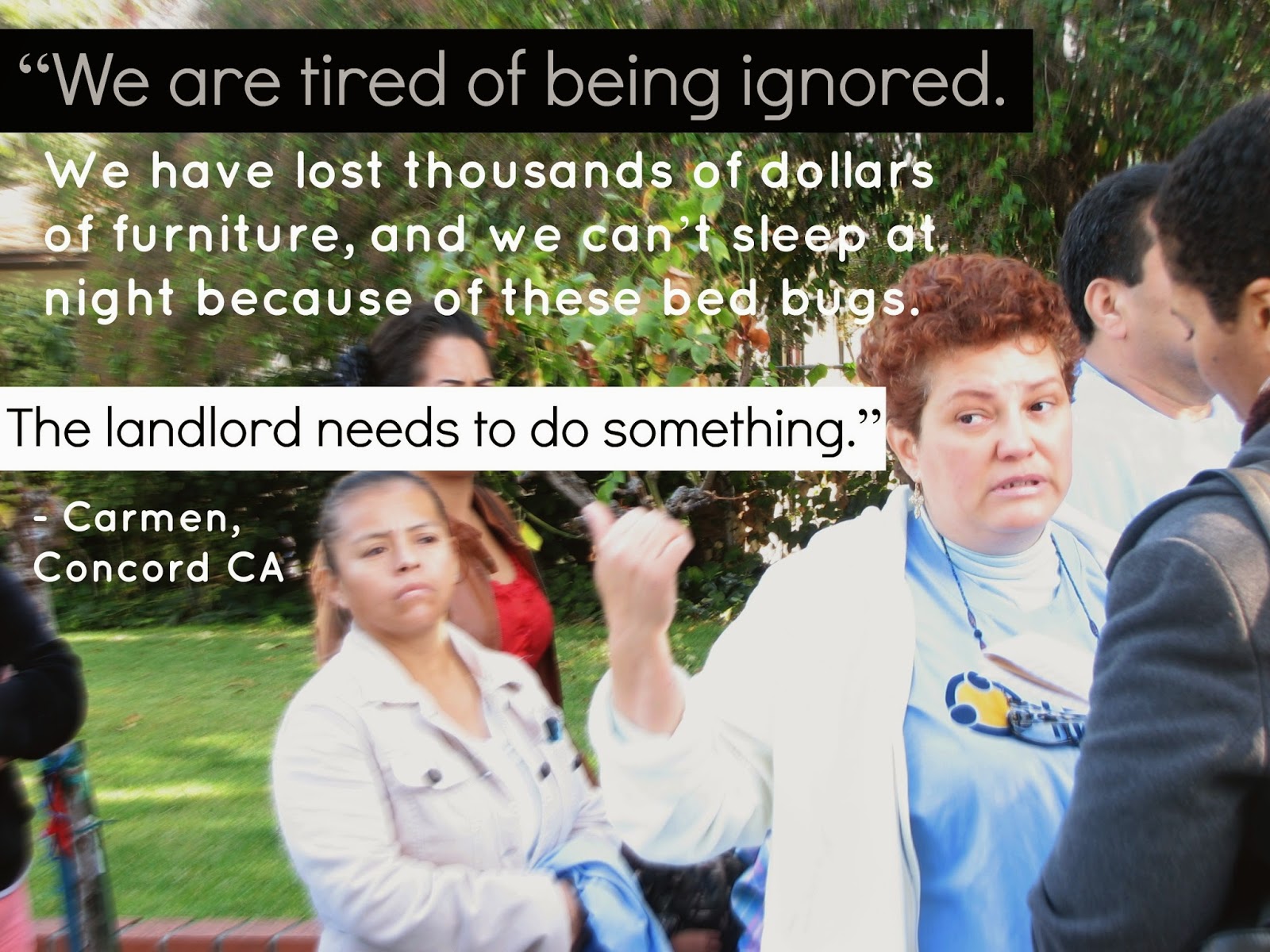 A positive, comfortable and fun environment to work in, putting a lot of emphasis on my education

I need to thank all of the members of the Tenants Together team for their guidance and patience. I thoroughly enjoyed getting to know all of the other interns and volunteers, who made coming to work fun for me. Working in the office with Aimee and Aileen taught me not only how to deal with tenants rights issues, but also how to be a good teacher (learning by their example). Dean provided a sense of direction and goals that were attainable, and Leah reminded me the significance of details that I had often overlooked in favor of the bigger picture. And of course, my boss Guillermo, who not only guided me through the ins and outs of working as an organizer, but who went out of his way to teach the theory behind the actions we were taking. He insisted I take online courses through the New Organizing Institute, which seemed to parallel the work I was doing in Concord. More than that, he provided a positive, comfortable and fun environment to work in, putting a lot of emphasis on my education, because he believed in what I was learning.

I do not know if I will ever be able to thank Tenants Together enough for what they have done for me. They have shown me what it is to make change and opened my eyes to some serious issues in the world. Who knows, maybe this is my calling, maybe not, but I can say with absolute certainty that I have been changed by this experience. I like to believe for good.