Last week tenant activists breathed new life into AB 1506, the state bill to repeal Costa Hawkins. Costa Hawkins creates landlord loopholes to undermine local rent control. AB 1506 was tabled this year as a two-year bill (often a death knell in the Capitol). BUT we brought it back through a series of actions on Assemblymember Chiu (the chair of the Housing Committee), Assemblymember Bloom (the lead author of the bill), and leadership Assembly Speaker Anthony Rendon (over 500 letters sent by you!). We put the pressure on legislators to make their actions match their words when it comes to Costa Hawkins repeal. Now, a vote in the Housing Committee is planned for next January 11th in Sacramento! Next up: passing AB 1506 OUT of committee!

Join us THURSDAY Jan 11th to keep up the momentum for Costa Hawkins repeal. Click here to RSVP.

Send a letter NOW to demand AB 1506 gets out of committee and a vote on the Assembly floor! 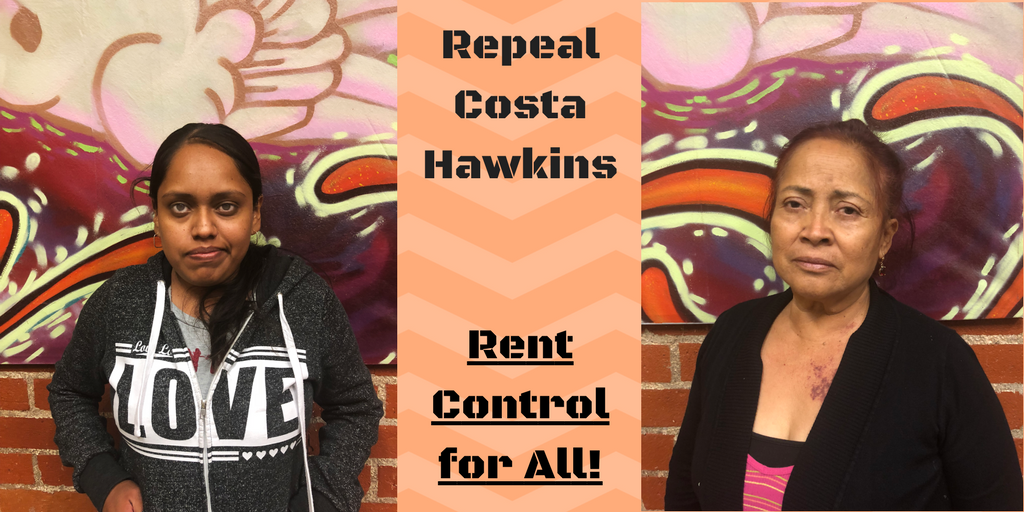 Maria and her daughter, Hilen, are long-term, rent regulated tenants in a rapidly gentrifying area near the University of Southern California. Right now long-term, low-income tenants are being displaced to make space for student housing.

Maria says that their new landlord has been harassing them, refusing to make repairs, and has tried to evict them. The landlord refuses to fix things in the apartment and has made racist comments to them, including insults related to national origin.

Maria says their new landlord said to them, "You don't pay me enough rent for this apartment."

The landlord knows that he can raise the rent however much he wants if Maria and Hilen leave. This is because Costa Hawkins bans vacancy control, which would allow both new and old tenants to benefit from rent control.