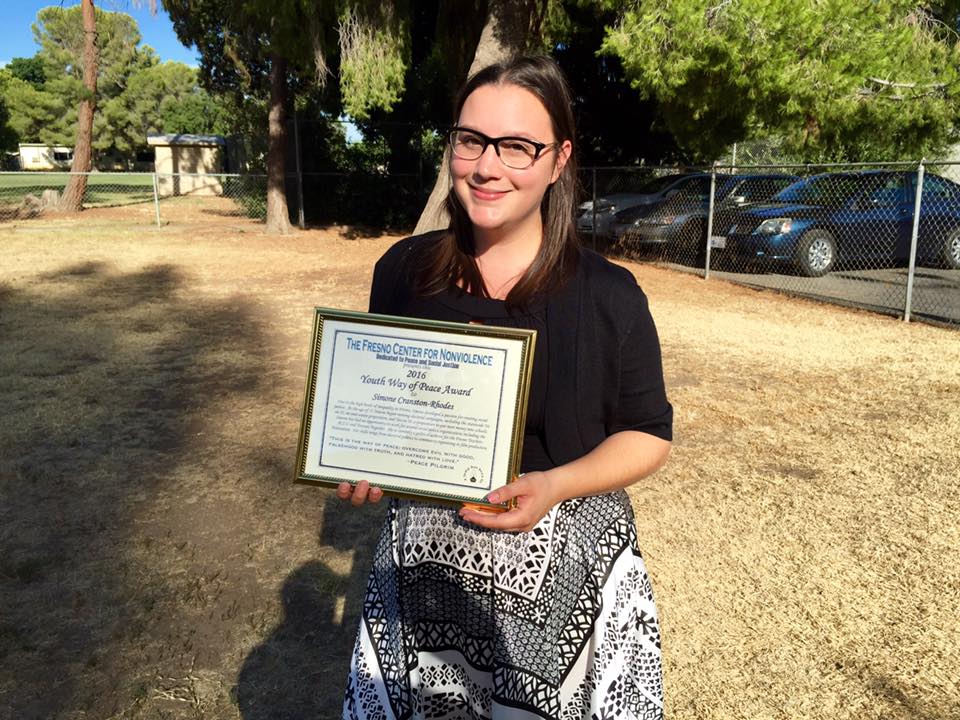 Below is a transcript of our former Central Valley Organizer Simone Cranston-Rhodes acceptance speech for the Way of Peace Award for Youth given by The Center for Non-Violence in Fresno:

Ten years ago in 2006 I was honored by The Center for Non-Violence and given the Way of Peace Award for Youth. This was my first award and at 16, I was making my first steps into activism. As a junior in High School I helped lead a massive walkout pro-testing harsh immigration laws being introduced in as national policies. Being born into an activist family, fighting for peace and social justice came naturally. Even at a young age I learned to stand up even when it wasn’t the easy thing to do.

I would like to thank my family, my mother, my father, my sister, my grandma, my husband, and my son for always supporting me and helping me find the courage to stand up for the right thing. I would also like to thank the tremendous amount of support and encouragement I have received from the progressive community, without whom I would not be here today. This includes the many groups and organizations I have been involved with Peace Fresno, Center for Nonviolence, ACLU, CFA, FTA, Women’s Democratic Club, the Partnership, Fresno for Bernie, and Tenants Together. These groups have shaped my activism and given me purposes in my fight to create social justice in Fresno.

In 2014 I embarked on a journey to become a tenant’s right advocate in Fresno by becoming an Organizer with Tenants Together. When I began discussing tenant’s rights it was barely on anyone’s radar, no one at City Hall was talking about it, and for local groups it was not a top priority.

Over the years our Slumlord Free Fresno campaign started to gain traction. The general public began to be aware that over half of Fresno’s residence are tenants and many of those were living in inhabitable living conditions. Through monthly seminars on tenant’s rights that offered free legal advice, we began to realize the systemic problems that were causing these horrible living conditions in Fresno.

In the November of 2015 Summer Set Apartments a building complex in central Fresno had their gas go out for weeks. During these cold months I met with families with elders and children who lived without heat or the ability to cook. Many of these families faced language barriers and fear of a system they knew nothing about. Tragically an elderly tenant froze to death during these weeks. It is unacceptable that living conditions in our City have to come to this before our leaders take notice.

Finally after years of suggesting routine inspections of rental units in the City of Fresno Mayor Ashley Swearengin has created a task force to create a policy for routine inspections and was one of her top points during her last State of the City address this past week. It is wonderful to hear City leaders talk about creating habitable housing for Fresno. But we never had to have gotten here. The same Mayor who is creating a solution to inhabitable housing is the same Mayor who under her administration cut over half the Code Enforcement officers in the City. In February of 2009 we had 50 Code Enforcement officers in November of 2015 we had 23.

Without Code Enforcement officers to uphold policies then we will be in the same place we started. Through my years of work for tenant’s rights I have seen greater awareness of the issues. And it brings me so much joy that we as a city have prioritized habitable housing for our citizens, it is a matter of life and death.

Thank you everyone who has help lift me up and allowed me to do such wonderful work. I am truly grateful.