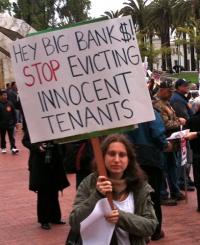 Tenants Together, California’s statewide organization for renters’ rights, began circulating a referendum today to overturn this week’s action by the City Council to repeal Merced’s Just Cause for Eviction law. Passed in November 2011, the Just Cause law protects tenants from arbitrary eviction by banks and investors after foreclosure, and has already stopped or postponed multiple evictions of tenants after foreclosure. The council voted to repeal the popular anti-eviction law at the request of real estate industry interests, a move that prompted the first referendum campaign.

This is the first known referendum on a tenant rights issue in the Central Valley.  Tenants Together will need to collect approximately 2900 valid signatures from Merced registered voters within 30 days in order to stop the repeal from taking effect.  “With our volunteer base,” said organizer Guillermo Elenes, “We are confident we will reach the signature goal.”

A successful signature drive will force the issue back to the Merced City Council which can either stick with its decision or change course.  If the council sticks with the decision, the matter would go to the voters.  According to Dean Preston, Executive Director of Tenants Together, “Mayor Thurston and Councilmembers Pedrozo, Murphy and Dossetti do not want this issue to land before voters; they know voters will side with Merced residents over national banks and predatory investors.”

Merced’s new mayor, Stan Thurston, is a major local landlord who made eliminating the Just Cause law a top priority after taking office, despite the range of economic issues facing Merced. Thurston found allies in two new councilmembers with real estate industry ties – Councilmember Tony Dossetti, himself a landlord who owns a foreclosed property of the type regulated by the ordinance, and Councilmember Mike Murphy, whose Bay Area based law firm (Orrick, Herrington) proudly touts its record advising banks on mortgage securitization and other practices that caused the foreclosure crisis in the first place.  Also voting for the repeal was Councilmember Pedrozo, who supported the law last summer, but subsequently bowed to real estate industry demands and became a leading opponent of the law starting in November.

At issue are arbitrary post-foreclosure evictions of renters. Since December, these evictions have been outlawed under Merced’s Just Cause for Eviction law.  The law applies to foreclosed properties and prohibits evictions of renters unless there is specific cause (like nonpayment of rent, nuisance, owner move-in, etc) for the eviction.  Foreclosure alone is not grounds for evicting a tenant under the ordinance.

The Merced Sun-Star published an editorial supporting the Just Cause law in November.  Mayor Pro Tem Noah Lor, Councilmember Mary-Michal Rawling, and Councilmember Bill Blake, have consistently supported the law and opposed repeal.  As they explained in a recent Op-Ed in the Merced Sun-Star, “We will not continue to allow banks and other post-foreclosure owners to displace Merced's families for no good reason.”

Tenants Together is encouraging supporters to contact info@tenantstogether.org to get involved in the referendum.
***