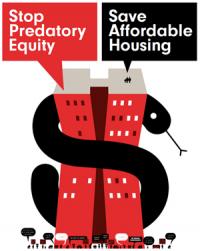 Yesterday,
California Public Employee Retirement Service (CalPERS), the nation’s largest
pension fund, adopted a policy to ban investments in real estate deals that are
premised on displacing tenants. According to the new policy, “CalPERS will not participate in private
real estate investment strategies that rely on or result in eliminating
rent-regulated housing units, converting such units to market rate units, or
raising rents above regulated levels as determined by the appropriate governing
authority.” The CalPERS’ board
overwhelmingly approved the policy, with only one board member voting in
opposition.

“This
is a major milestone in our campaign to stop investments in predatory real
estate schemes that displace tenants from their homes,” stated Dean Preston,
Executive Director of Tenants Together, California’s statewide organization for
renters’ rights.

Tenants
Together, in conjunction with the East Palo Alto Fair Rent Coalition, has been
leading a campaign to stop CalPERS from investing in “predatory equity” deals
that seek to generate short-term profit through the displacement of
tenants. Predatory equity is a
particularly nasty form of real estate investment in which investors pay more
for rent-regulated housing than can be justified by the actual rental income at
the time of purchase, as part of a plan to force rent-regulated tenants out of
their homes and replace them with higher-rent tenants or purchasers. It is a business model premised on the
displacement of tenants.

Since
2008, Tenants Together has urged CalPERS to adopt “predator-free” investment
criteria. Tenants Together launched its campaign to stop pension funds from
investing in predatory equity deals after learning that CalPERS had invested
$100 million in a scheme led to generate short term profits in the City of East
Palo Alto by driving out tenants living in rent controlled housing.

Organizers soon learned of huge investments
($500 million from CalPERS) in a similar scheme in New York City. These schemes
displaced thousands of tenants and did great damage to CalPERS’ reputation as a
socially responsible investor. Tenants
Together has been publicly critical of the pension fund’s involvement in these
evictions.

The
predatory equity schemes not only harmed tenants, but also proved to be bad
investments on purely economic terms. CalPERS
lost every dollar invested in these speculative deals, including $100 million
in East Palo Alto and $500 million in New York City. In repeated letters to CalPERS and in
testimony before the CalPERS board, tenant advocates had predicted the collapse
of these investments.

In
February 2010, Assemblymember Tom Ammiano (D-San Francisco) introduced AB 2337,
the Socially Responsible Investment Act, to ban predatory equity investments by
the state’s public employee pension funds. Preston praised Ammiano’s leadership on the issue: “Assemblymember
Ammiano deserves enormous credit for championing this bill to ensure that
public employee pension funds stop investing in predatory schemes that displace
renters.” Tenants Together is
co-sponsoring the legislation, along with the Fair Rent Coalition. The bill will be heard in the Assembly PERS
committee on April 21, 2010.

“CalPERS’
investment partner evicted me and my neighbors for no good reason,” said
Christopher Lund, Communications Director for the Fair Rent Coalition. “It’s shameful that public employees are
having their retirement funds used to throw residents of East Palo Alto out of
our homes. I’m very pleased that CalPERS
is taking this step to prevent these investments in the future.”