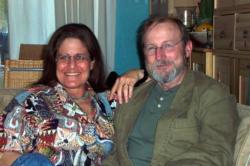 I moved to Santa Monica in 1974 and have been renting my home ever since. In those 36 years I have lived in 16 different rentals: 10 apartments & 6 houses from Santa Monica to Santa Barbara to Daly City and finally Pacifica, CA.

I have been illegally evicted from my home twice--once in retaliation for filing a complaint against the landlord for a serious mold problem in my apartment. I was a disabled person, but that did not appear to matter. I was harassed, threatened, humiliated and degraded by my landlord. Even though there was Rent Stablization in L.A. to provide rights for renters, in the end it all did not matter. I was forced to move; I had no rights at all.

Since moving to NorCal, my husband and I have found we have even less rights in San Mateo County. The landlords of our first home did not fully disclose the mold & asbestos in their house before we signed a lease. We did not know that they had to give us waivers to sign for lead paint, mold, asbestos, & registered sex offenders in the neighborhood. They told us about the mold and the exposed asbestos on the heating ducts in the basement & garage when they gave us the keys to move in, before doing a walk through of the house; we had movers arriving the next day. I then knew why there was a strange smell in the house. It was covering up the smell of mold that became very strong when the cover-up odor faded. In short time I started to get sick with flu like symptoms, but I knew I was having allergy reactions to the mold. We had to move for health reasons, but the landlords did not care. I took it upon myself to find tenants to take over our lease. I found the perfect family of four who really wanted the house. It was a done deal--all they need to do is come up and bring a new lease to have them sign.

The landlords decided to cancel the deal at the very last minute & instead wanted to sue us for breach of contract--our one year lease. We had already made plans to move & did not stop that procedure. We left the house spotless. I scrubbed every surface. It was cleaner than when we moved in. They accused us of destroying their house & kept our $3,000 deposit. They then used our money to seal the asbestos, paint over the mold and upgrade their house! Then they accused us of abandoning their house.

I found an attorney who handled landlord-tenant cases. She promised to get our money back and then some, but later decided to file a civil case for my physical problems resulting from breathing in mold and asbestos particles. We thought she was doing her job, but in the end she abandoned our case leaving us without representation. I found out she never served the landlords. The case is sitting in Redwood City civil court files waiting for me to get the landlords served successfully.

I hired a paralegal who was very dedicated and ready to go the distance to fight the injustice we had endured by both the landlords and the attorney. We filed a formal complaint with the CA State Bar against the attorney. She had blatantly broken many of the rules that all attorneys must follow in the State of CA or get sanctioned and possibly lose their license. But, during this process I find out my paralegal is a drug addict/alcoholic and has to go into court-ordered rehab or go to jail! Could things get any worse?

Now it is a year later. The paralegal said she would make things right and promised to finish what she had started; I am still waiting. She has all of my files so I cannot do anything without them. She has gotten married, moved, and gotten a full time job since getting out of rehab, but my case still sits in court files. The CA Bar threw out my case against the attorney. When it was presented to the attorney, she denied everything and put the blame back onto me and my husband-- even though we had proof she had abandoned our case and did not do as she said she had done. She even created fraudulent receipts that she never sent to us. So, we are now out $5000 that was stolen from us by the landlords and this attorney and nothing is getting done.

Our present landlord continues to raise our rent at will because he got hooked into a lease agreement with his bank with a balloon payment coming up really soon. We now pay $2400 per month for our home; we cannot afford to move. There are no laws to protect us in San Mateo County!  The landlord can do what he wants when he wants. We are always looking for other houses to move to in case he suddenly decides to tell us we need to move. Life as a renter really sucks nowadays, and we continue to have no rights!