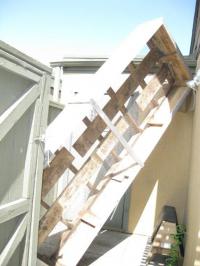 My roommate and I signed a 2 year rental agreement. When we moved in, we found our landlord had left 2 sawhorses, some tools and a huge 12'x 4'x 1 1/2' above ground planter in our back yard. The huge, unsightly planter was leaned up against the building. These things ruined the look of our small yard area and it made much of the area we paid to rent totally unusable.
My landlord and I had a phone number for our landlord, but had no idea where she lived if we had an emergency. She gave us a PO Box. We had agreed that she could leave some of her items in a locked storage shed located off of our yard. When trying to establish where things were in case of emergency, we realized that our water heater was in the back of the shed where her items were stored; also, the water heater was gas.

Our landlord refused to give us a key to use only during an emergency. She told us she would not move her things out of the she for another month, even after we told her to.

Once she did move the items out, we found that she had packed the storage shed all the way to the ceiling and there was no way to get to the hotwater heater if we needed to. The ventilation was blocked and the hotwater was more than 20 years old. We had been afraid not to have access to it and requested a key on several occassions, but were refused. Also, the huge planters and saw horses blocked the entrance and she had refused to move them.

Four months after we moved into our home, our landlord sent us a messge notifying us that she was selling our home and the new owner might let us stay there; otherwise, we would have to move out. She told us they would put a lockbox on our door and the realtor would be going through all of our home and taking photos.

We felt so violated. We had a 2 year lease. We did contact an attorney and ended up forking out close to $1000.00 to help us with a letter and preparing a brief for small claims court.

We did learn our rights and strictly enforced them. My roommate and I would not allow anyone in our home without us here. Our landlord wanted us to leave. There was no way I was going to leave my dog and personal possesions while strangers marched in and out. It was so horrible.

While moving my furniture into my home, I injured 2 vertebra in my spine. I had gotten so I could barely stand up and was in physical therapy 3 times a week. I was taking some kind of painkiller that made me very dopey. Soon after I had my back injury and our landlord announced she was selling the place, she sent us a message telling us to keep the place looking extremley nice for showing and that she expected us to learn to show her home. Since I was so severely injured, the place was covered in boxes and looked terrible. I had been unable to sleep, must less do anything else. My home was in forclosure, I was moving out of it and dealing with my previous residence.

Our home was posted on the internet for several months. There were no statments noted that residents with a lease were in the home.

Although I told the realtor that we would not allow showings at night or on the weekend, he still called at those times and requested to show the property. It made me angry, but I kept my cool and remaine polite.

In Feb. 2011, I come home from the grocery and find notices all over the front door saying the property was in forclosure and was being sold at auction in 21 days. We had no idea our landlord had not been paying the mortgage. The realtor did keep putting the forclosure auction off until April 26, 2012. Also, note that we took possession of the place on Feb 4, 2011.

Back to Jan. 2011. I had filed a small claims count case against my landlord for refusing to move the planter, sawhorses and some tools out of our yard. The planter was also standing up and was not only an eyesore, but a danger. I filed for not giving us access to the hotwater heater during emergencies. She always said we could contact her for emergencies. We had a phone no. and e-mail address, but had no idea where she lived. We had found that the landlord was supposed to provide a physical address for either herself or a designated manager. She refused to do either. The pressure I was feeling from my landlord trying to force us to get the place in "show" condition and strangers coming in and out was taking a bad tole on my health. I have a lot of health probems, migraines, asthma, panic attacks, etc. and all of my health problems were getting out of control My life had become a living hell. I inclued harassment in the lawsuit.

So, went to Small Claims Court. We signed in a wrote our addresses on the form. We noticed that our landlord wrote in the address of one of her friends and we knew she did not live there.

The judge as me to comment regarding my case and I started to tell it. Shortly afterwards, he stopped me and then began asking me questions that did not allow me to explain the situation accurately. He cut me short. Then he told my landlord to tell her side. She rambled on and on and he was very sympathic to her. When I once again tried to present my side, he would cut me short. My landlord had said she was afraid of me because of controlled substances. She made me out to be some crazed drug addict. I don't even drink or smoke. I am a medical professional who does much volunteer work at animal rescue centers. It was obvious he could not relate to me and everying I said was made to appear different that the truth.

We received the judgment. The only thing he fined her for was not including the Megan's law link where there were 2 registed sex offenders living within 80 feet of us. He also noted that he thought the landlord had been more than lenient and tolerant of me. He made other comments regarding what a problem tenant that I obviouslly was.

I was dumbfounded. The judge was a pro tem judge and a highly seasoned attorney. I could not believe he had not seen through her lies, he felt sorry for her. I lost all respect for our legal system. When I had told the judge that 2 attorney in the field had told me that a landlord has to provide a physical address on the lease, he told me I was wrong. I had paid $750 for an attorney to prepare the brief with plenty of good photos and clear and consise wording. My landlord came in with a few ragged sheets of paper.

When I received the judgement, I thought how can a judge make the laws. He seemed to have done so and there were no checks and measures. When I tried to appeal, I was not allowed to do anything.

On April 6, 2012 at around 6 PM, a man shows up at our door saying the bought the property that morning. He gave us a notice and said to be out in 3 days. He would not give us his name or contact information. We told him were tenants and asked if he planned to move in. When he said no, we told him we would be staying to the end of our lease. I called the attorney listed on the notice and was told that the new owner was suing for an eviction to get us out. He would not give the owner's name or anything else to us.

We are putting our rent into an account since the attorney said the new owner will not accept our rent. We sent a letter to the attorney asking him to let us know when our landlords stop refusing the rent and we will send it to him.

Last night, Aug 2, 2012, a notice was left on our door. The new owner is sewing for an eviction, unless we move out immediately.

All of this mess started with a dishonest landlord who had not respect for destroying the lives of others.

Some people want to know why we don't go ahead and move out. We love our home. We have made many friends. The main reason is there is no guarantee that if we move that this home scenerio will start all again with anothe landlord.