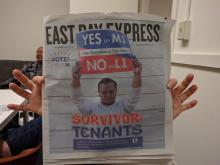 The Stanford paper—The Effects of Rent Control Expansion on Tenants, Landlords and Inequality: Evidence from San Francisco (Diamond, McQuade, Qian, October 2017)—has been widely cited in mainstream media outlets to buttress the claim that commonsense rent increase controls make housing more expensive despite a wide body of evidence, including hard data in the study itself, pointing to the fact that rent control provides stability for low-income tenants, especially seniors, immigrants and people of color. The paper acknowledges the direct benefits of rent control but incorrectly argues that the benefits are outweighed by other indirect factors. The Stanford study was released amid a historic wave of municipal, people-powered legislative campaigns for rent control forming throughout California.

“It’s like blaming firefighters for the fire, instead of the arsonist,” commented Preston, Executive Director of Tenants Together.

Meanwhile, research on the effects of rent control on displacement from the Urban Displacement Project—a group of researchers at UC Berkeley, UCLA and Portland State University—found that rent control was associated with less displacement and more housing construction: between 2007 and 2013, the six cities in the Bay Area with rent control produced more housing units per capita than cities without rent control. A new 2018 research report by Urban Habitat further confirms what tenants already know and ideologues want to hide: rent control is integral to community stability for California’s working-class people of color.

“Rent control is essential to delivering economic and social justice to California’s most vulnerable communities. We are pleased to set the record straight with this paper,” commented Shanti Singh, co-author of the response released today. “Housing markets are complex, and analysis of housing policy deserves thoughtful study that does not rest on flawed assumptions.”